What part of the USS is bent?

For years I've been referring to the gel photos and DNA-structure as evidence that the H. influenzae consensus USS sequence is naturally bent.  The gel images on the left (gel run by a former postdoc) show that a 222 bp fragment containing the consensus USS migrates slower than the control fragment with a randomized-sequence version of the USS.  Slow migration is an established consequence of DNA bending.  The structure diagram on the right (generated by the MDDNA website, which appears to have gone tits-up) compares the same consensus and randomized sequences, and predicts a slight bend at each of the USS T-tracts. 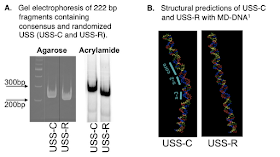 The current postdoc's analysis of uptake bias indicates that the T-tracts play a relatively minor role in uptake specificity, which got me thinking about whether it really is the T-tracts that are bent.  We're in a position to test this, since he's synthesized a number of different variants of the USS for uptake assays, and I can easily repeat the gel analysis to see if any of the changes affect gel migration.

Below is a list of the different USS variants that he has synthesized.  (The DNAs don't contain 'n's; I've just put these in at positions where the bases don't matter for DNA uptake.) 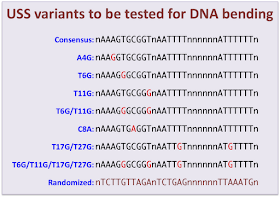 From the top, we have:


These variants let us examine effects of changing the inner core, the outer core and the T-tracts, singly and in combination.  We expect to see slower migration of the consensus fragment than the randomized fragment.  Finding that all the variant fragments have the same mobility as the consensus fragment might not tellus much because the individual changes we're testing might not have dramatic effects (e.g. maybe we'd need to change the whole T-tract, not just one T).  But finding that one of more variants migrates faster than the consensus would be very informative.

The fragments we'll test aren't cloned; the psotdoc generates them when needed using PCR and specific primers.  So he's going to make them for me, and clean them up to remove primers and primer-dimers.  Then I'll check their DNA concentrations (because concentration can affect gel migration) and run them all in a gel.

I'll try to dig up the gel details in the former postdoc's notebooks - I/m guessing 1% agarose, TAE buffer, and a fairly high voltage, but she might have done something different.  The gel image was included in our 2007 CIHR grant proposal so I'm guessing she did the experiment in January or February of 2007.  OK, I found the postdoc's notes (December 2006).  The gel was 6% acrylamide, run at 70V, with 10 mM MgCl2 added to the buffer.  Hmm, I wonder if we have acrylamide made up.

She then resequenced both the DNAs to confirm that they were the same lengths (these were cloned fragments).  This seems a bit silly for the PCR fragments we'll test, though it might we worth it if the gel results are interesting.  I can't think of any other way to check that the fragments are the same lengths - I don't know of gel condition where bending wouldn't happen or where it wouldn't affect mobility.